In 2017, people along the Texas Gulf coast and I were preparing themselves for what was to be the most destructive natural disaster in the history of the United States. I’ve been through a hundred serious storms, but this one was shaping up to be significant one.

As the massive Hurricane approached the Lone Star State’s coast last August, it was evident that the storm’s effect was going to last for years, and the forecasts seemed to tell the same story. I started in Amarillo that week when the weather turned and Harvey became a thing I travel down to Victoria Texas and then set up with the University of Florida hurricane research team.

I knew there was two sides of this storm’s effect. One side was the 145 mile per hour winds blasting down the beach that we were monitoring near the airport with our remote sensors. The other effect of the storm was the massive amount of water that powerful winds like those are able to move and dump onto a city. What ended up happening was catastrophic flooding in Houston and the surrounding areas that led to damages estimated at $125 billion.

Wave after wave of record-breaking rain came – a staggering 50 inches in the Houston area where we were. Itresulted in devastating flooding across the Gulf states. After roughly five days had passed, the hurricane moved east, putting an end to the rain. However, flooding was going to take several weeks to recede enough for the rebuilding and clean up to begin.

I was there before Harvey showed up, during the violent storm and helping people in the immediate aftermath…It was a big one.

The statistics around the Hurricane were eye-opening; 57 tornadoes were produced during the Hurricane – around half of which were located south and surrounding the Houston metro area.

The rainfall rates that were recorded during the Hurricane were also record breaking – with a peak of 6.8 inches of water in an hour in southeast Houston. There were exceptionally heavy rain bands training over the same location. In fact, there were more than 17 recorded values of rain surpassing 47 inches across southeast Texas – resulting in heavy flooding in Galveston and Harris counties. 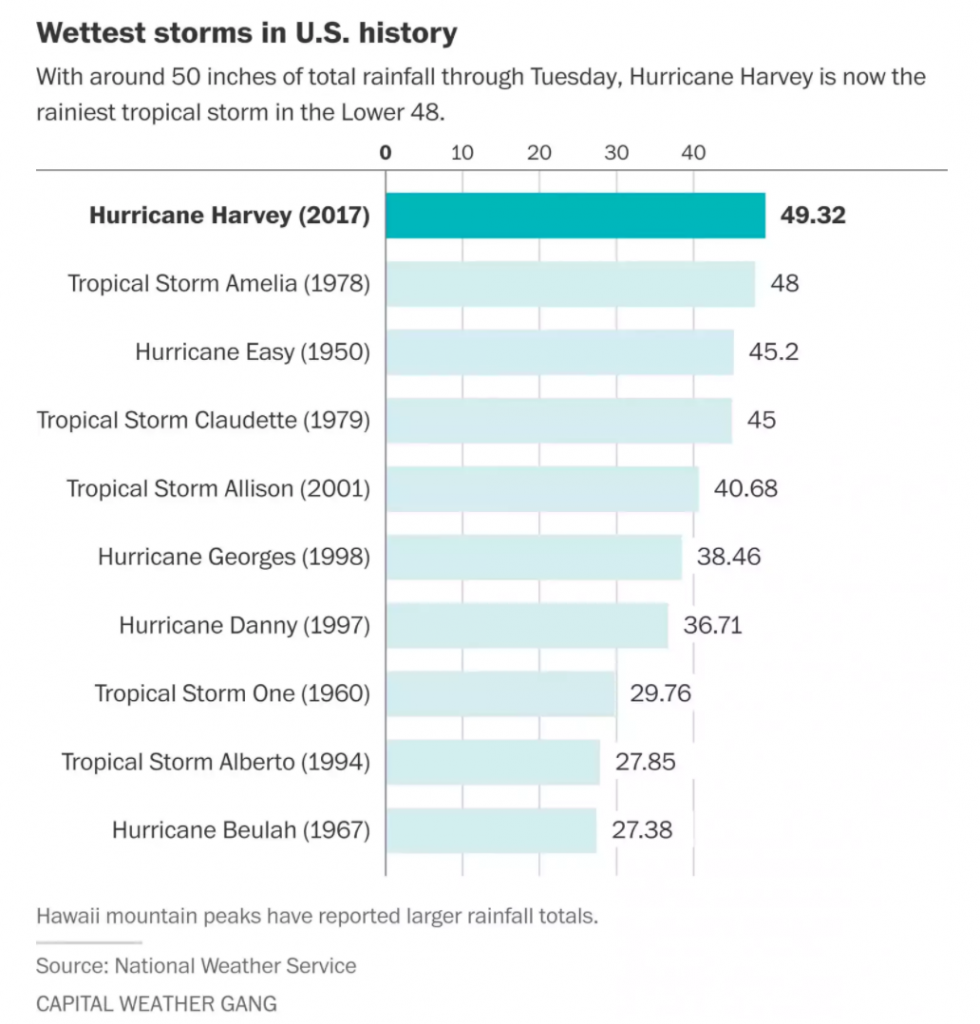 Most heartbreakingly, Harvey ended up being responsible for more than 68 deaths all over Texas. Around half of these casualties were caused in Harris County, where I spent a lot of time, and almost all of them were due to the flood. Moreover, more than 30 deaths have been attributed to indirect causes, such as isolation from necessary medical services, car accidents, and electrocution. Four people were even reportedly injured by a tornado north of Alabama.

Harvey is now known to be one of the deadliest hurricanes to hit Texas since 1919, and the deadliest U.S. hurricane in terms of direct fatalities since Hurricane Sandy in the Northeast.

A definitive report investigating the aftermath of Hurricane Harvey states:

What’s more worrying than the immediate aftermath of Harvey are the long term effects as well as the underlying flooding causes that continue to persist. The Earth has gotten warmer by roughly one degree Celsius since the start of the Industrial Revolution, and the atmosphere can hold about 7% more water vapor for each degree Celsius increase in temperature. Hence, it is not surprising that something as devastating as Harvey occurred, and if we continue on the same pace, there will be much more destructive rainfall events across the United States. By the end of the 21st Century, the chances, in a given year, of storms like Harvey hitting the area could grow to be as high as eighteen percent. Furthermore, the chances of a storm of his intense magnitude have risen from 1% in pre-industrial times to 6% today because of the rising greenhouse gases. It will continue to be a subject of debate whether humans are responsible for the change in Earth’s temperature, but nevertheless storms are getting more powerful.

This video from the PBS Show “Rise of the Superstorms” will show just how incredibly strong 2017’s Hurricane Season was throughout the Southeast. Keep in mind that the University of Florida Hurricane Research team’s hardened weather reporting equipment was part of the basis for this show: https://www.pbs.org/video/rise-superstorms-preview-exdnbq/

Here’s some additional footage of the difficulty of simply getting the University of Florida storm tracking equipment in place:

Now that a year has passed since Harvey wreaked havoc in Houston, many locals believe that the recovery efforts are not happening quickly enough. Thousands of people are still in need as they are forced to either live in damaged homes or hotels. While efforts from some residents and nonprofit groups have stepped up to repair homes and clean out debris, there is still a huge amount of progress to be made and the city awaits additional federal and state funding in order to achieve full recovery.

To put things in perspective – more than 3,000 households in the Houston area were living in hotels as of February 2018, and many more thousands continue to live in houses that are in dire need of repair.

“John Minor in green jacket and blue life preserver  rescuing Harvey victims at an apartment complex in Houston. He eventually was able to help 23 people.”

Houston continues its efforts to make up for the $2.5 billion in damage that infrastructure and city buildings have suffered, including the performing arts center and the municipal courts building. Funding is a major hurdle in achieving progress – and delays in federal funding have led to the postponement of many recovery programs such as one that was meant to repair damaged homes. As for the debris left behind – more than 1.7 million cubic yards of debris have been collected since the start of the year. To put that into perspective – that’s enough debris to fully fill more than 13,000 buses.

Houston is set to receive a $5 billion grant from the U.S. Department of Housing and Urban Development which will be used to repair damaged infrastructure, businesses and homes. It is unclear how much (and when) Houston and the rest of Texas will get of the $90 billion in federal disaster relief aid. Rebuilding efforts continue to move forward as the city proceeds through more than 10,000 Harvey related repair permit applications.

FEMA officials have stated that while recovery efforts have not gone as quickly as expected, hundreds of thousands of homeowners are already rebuilding and repairing damaged homes – and all of this recovery is being helped by the billions of dollars in flood insurance payments, Small Business Administration disaster loans, and federal grants.

The continued planning and execution of plans by the government in order to achieve recovery will be crucial as people living in floodplains have become increasingly at-risk of major storms and the resulting flooding. All the while – the 2018 hurricane season is fast approaching, but I will still never forget the 2017 season.

“The best way to find out if you can trust somebody is to trust them.” - Ernest Hemingway