On September 10th of this year one of the largest hurricanes that Floridians have dealt with since Ivan or before that Andrew smashed into the Florida Keys. Her name was Irma and she was a strong category four storm when she hit Cudjoe Key. I worked it from Miami to Marco Island and set weather stations up and down I-75. Since then our team has inspected dozens of properties on our role as building consultants and floodplain managers. This has been mostly a story of cat 4 landfall on the keys without the big build up of flood that could have been. The second landfall at Marco Island was also dramatic but could have been worse with a different track. The damage was much lighter than it could have been but its still was felt from the top to the bottom of the east coast of Florida and from the Keys to Ft Myers over on the Gulf.

The remote nature of the Keys made survey extremely difficult and time consuming and for days people feared the worst for the Conch Islanders that stayed behind. We are seeing now that from mm 28 up to Islamorada the wind was really intense and the flood moderate all things considered. I am hearing reports from different sources but the best weather data is from the National Weather Service (NWS).

She made quick work of the Florida Keys and continued to churn northbound making a second landfall at Marco Island. Governor Rick Scott and his team flew over the Florida Keys the following Monday with Scott declaring simply, “It’s devastating.” 2,500 of Florida’s Search and Rescue professional team left Orlando to go to work saving Americans.

In the immediate aftermath of the storm four people lost their lives and a mind blowing thirteen million homes and businesses were without electricity. Later the death toll was increased to 26 when counting those in the Caribbean. In the third largest state in the United States one-third of its residents were without power.

In a strange twist Jacksonville suffered immense flooding forcing dozens to be rescued by authorities. This happened in a city that was considered a safe destination for South Florida evacuees from early storm tracking models. While along the west coast in areas such as Tampa Bay braced for the worst but only suffered light damage citywide. Taking it a step further Governor Scott said that damage along the southwest coast was not as bad as feared. Although he did continue that, “I know for our entire state, especially the Keys, it’s going to be a long road.”

Florida wasn’t the only state to be affected by the storm. As Irma moved north she caused outages and flooding all the way up through parts of Georgia and South Carolina. A tornado that spun off of the hurricane was reported along the coast of Georgia. Firefighters were dispatched to help some resident trapped by debris as homes were smashed by falling trees. And for the first time in recorded history there was a tropical storm warning issued for Atlanta of all places. More than 1.5 million residents of Georgia were also without power by the Monday following the storm.

Hurricane Irma will go down in history as one of the most destructive storms in Florida history, but we know from our experience it could have been much worse. Bloomberg reported that Florida missed the worst force of the storm because “Irma’s powerful eye shifted westward, away from the largest population center of Miami-Dade county. Initially as the storm tracked towards Florida estimates pinned the expected damages potentially up to $200 billion dollars. Thankfully an anomaly called “The Bermuda High” pulled some of the power out of the storm before making landfall. Even though Irma ultimately made landfall south of Miami at a Category 4 hurricane she still packed a powerful punch and wreaked havoc and destruction as she churned over the entire state following a track similar to Charlie in 2004.

Even as early as mid September CoreLogic, a real estate analytics and intelligence agency reported that residential property flood damage loss in five states (Florida, Alabama, Georgia, North Carolina and South Carolina) is estimated between $42 and $65 billion. All of it due to storm surge inland and flash flooding alone. 80% of the damage caused by flooding is uninsured.

Because of the damage that Irma left behind all residents are scrambling to restore some semblance of life normalcy. So, insurance claims are filed quickly. But it turns out one of the biggest challenges to restoring the state back to normalcy is the time necessary to both resolve the claims but arrange for the repairs. Everything up and down the supply chain is affected.  Even as recently as December 4, 2017 Florida OIR (Office of Insurance Regulation) reported in its claims analytics that over 230,000 insurance claims still remain open in the state of Florida alone. The industry has brought in adjusters from all across the nation as they compete with those already at work following Hurricane Harvey. 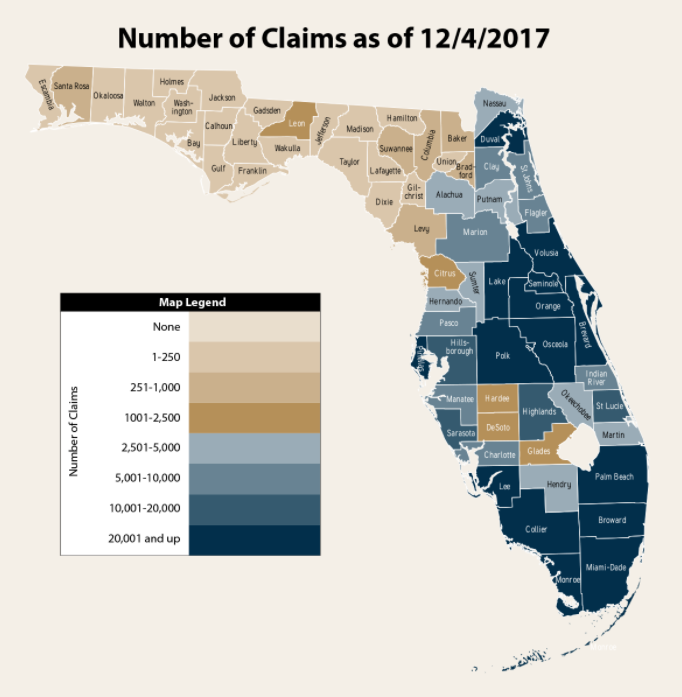 Necessity truly is the mother of all invention and as insurance carriers work to get as many claims closed as possible they are relying on new methods to get the job done. “Following Hurricane Irma, EagleView captured thousands of drone images for claims inspections within the first week of being permitted into the airspace,” stated Kenneth Cook, Senior Vice President of EagleView OnSite Solutions. “This capability is essential for insurance carriers who receive high volumes of claims following a weather event. Drone inspection provides detailed imagery to help save claims adjusters time and ensure their safety after a natural disaster.” By working with hobbyists that are great at piloting drones EagleView gets them certified with the proper insurance training, including how to inspect a structure for the claims process. While drones cannot always be used as a solution for actually getting an adjuster to the property to close the claim they are a fantastic supplement to get the job started effectively.

Now more than ever the insured understand the importance of the work that insurance agents truly do as many agents currently spend countless hours keeping the information flowing from customer to carrier since Irma hit. Customers rely on their agents to almost act as their counsel in stressful times like this. Unfortunately, the increasing frequency of catastrophes should not be overlooked. With the change in our climate concern grows industry wide that we’re going to see more of this weather activity.

“It is better to remain silent and be thought a fool than to open one's mouth and remove all doubt.” - Mark Twain