Hurricane Michael roared into the Gulf of Mexico Oct. 9, 2018 as a late season storm that was not expected to turn into 155 Now 160 miles per hour sustained on the Florida Panhandle. Making landfall the next day in Mexico Beach, Florida, the Category 4 Now cat 5 hurricane was the strongest storm of the season and the third-most intense Atlantic hurricane in decades and hit in my back yard.

Damage estimated at approximately $15 billion from both the wind and flood wreaked havoc on homes, businesses, commercial and communities.

October 2nd, 2018:
The Southwestern Caribbean Sea and a broad area of low pressure begins forming. A large enough area that the National Hurricane Center begins monitoring it. As the system pushes northward it begins a tighter and more organized formation. 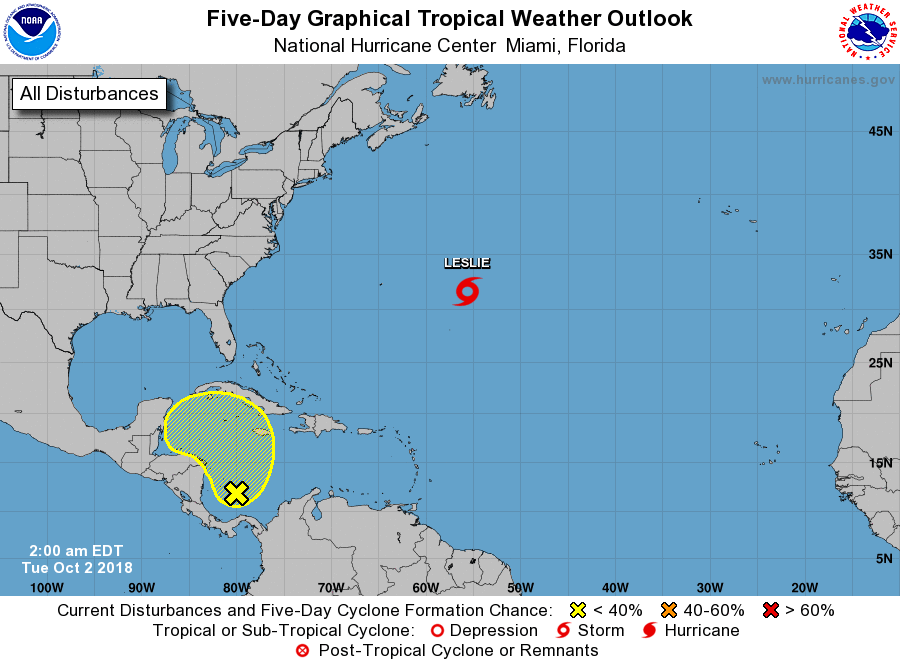 October 4th, 2018:
What is now officially characterized as a “system” continues on the northeast toward the Yucatan Peninsula. 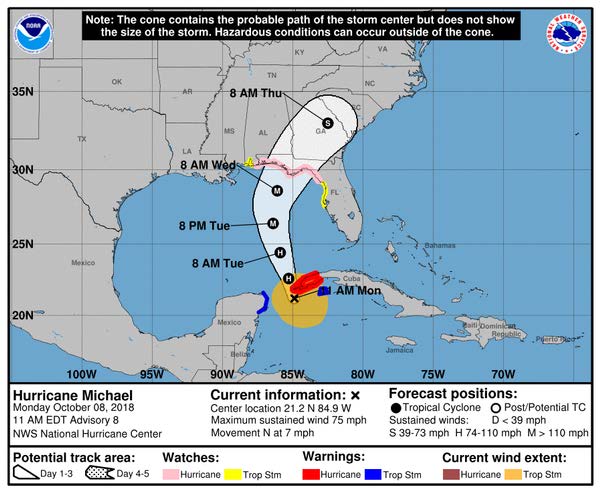 October 5-6th, 2018:
According to the NOAA that is now monitoring the system, what would become Michael has now developed into a well-organized convection. It was definitely a storm but lacked the circulation to officially be labeled a Tropical Storm. It did however pose an immediate land threat to the Yucatan Peninsula and Cuba.

At this time the National Hurricane Center issued advisories on the potential formation of Cyclone Number 14 on October 6th. Within 12 hours the the storm increased to a tropical depression with 50 mph sustained winds and now a predicted trajectory to both accelerate and make landfall into the Southeastern United States in the new few days. The government of Cuba also issues a Tropical Storm Warning for the areas of Pinar Del Rio and Isle of Youth. Mexico follows Cuba’s lead with with a Tropical Storm for the areas for the coast of the Yucatan Peninsula and Cabo Catoche. The current strength and makeup of the system is expected to hammer Central America, Cuba and the Northeastern Yucatan Peninsula with potential flash flooding and heavy rainfall. NOAA and the NHC alert area governments that the system is forecasted to become a Tropical Storm by Sunday night.

October 7th, 2018:
By morning the system was officially a Tropical Depression due to a closed center of circulation, with a significantly organized convective pattern to bale to classify the system into Tropical Storm Michael at 4:55pm that day. 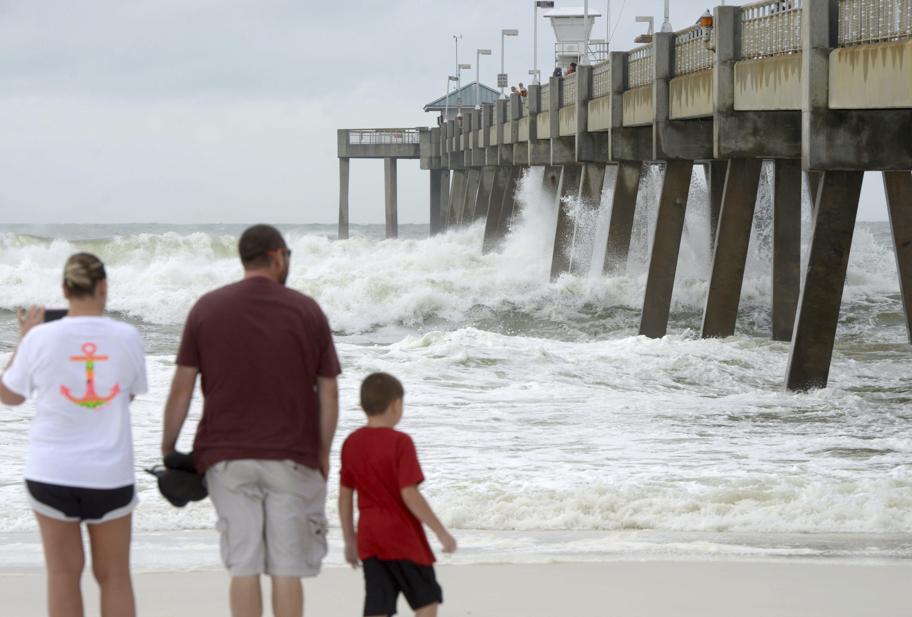 October 8th, 2018:
Reconnaissance aircraft reports the cloud pattern of the storm becomes much more organized and rapid intensification occurs. Tropical Storm Michael becomes Hurricane Michael officially. Deep burst of convection are noted within the eyewall and the powerful storm passes through the Yucatan Peninsula into the Gulf of Mexico clipping the western edge of Cuba and dumping massive amounts of rainfall onto the island. Simultaneously a nearly 35 nautical mile wide was reported to be forming perfectly.

October 9th, 2018:
By 9:00 pm die to rapid intensification Michael had become a major hurricane. In the span of only 6 hours the central pressure within the eye had dropped rapidly to 20mb. 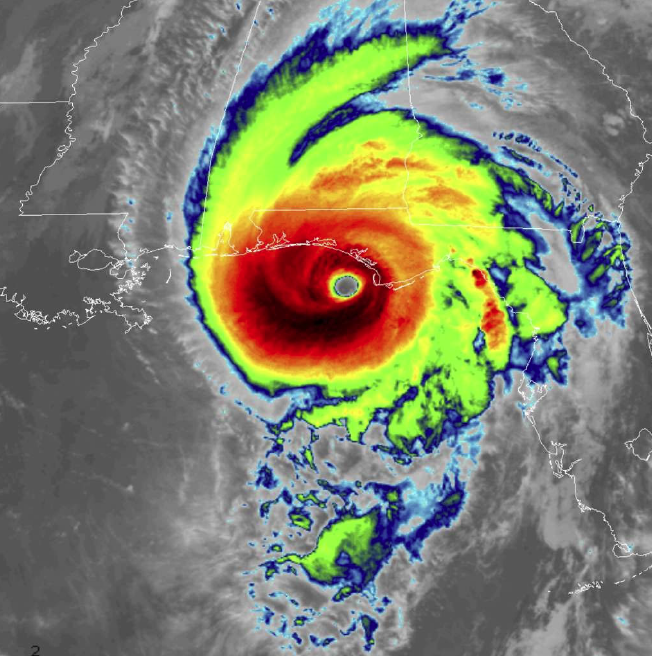 “Infrared satellite image captured at approximately 11:40 am EDT as Hurricane Michael approached the Florida coastline as a Category 4 Hurricane.”

October 10th, 2018:
Past Hurricane models forecasted Michael to rapidly strengthen over the next three days to become a dangerous and major hurricane by October 10. Rapid intensification along with a well-defined eye appeared. Making Michael’s strength to peak by the end of the day. The storm was sitting just below Category 5 levels of intensity with maximum sustained winds of 155 mph.

As Hurricane Michael chugged along at 13 mph it made landfall on the Gulf Coast of the United States in Mexico Beach, Florida later that day. By the amount of pressure within the storm   The storm surge was expected to reach between 9 and up to 13 feet in the hardest hit areas. This proved to be dead on with 14 foot above msl in Mexico Beach. Check the inundation map for your details from the USGS but know that many of the house at ground zero Mexico Beach were built slab on grade compliant 6 ft above msl and the flood was 8 foot above that.

Ranking by pressure makes Hurricane Michael the the third most intense Atlantic Hurricane to ever make landfall in the United States. Most noteworthy before making landfall was the speed at which Micheal intensified while chugging over the warm waters of the Gulf of Mexico: sea surface temperatures along Michael’s track were approximately 0.75-1.5°C warmer than average. This aided Michael in intensifying from a 35 mph tropical depression to a 145 mph hurricane in only 72 hours. 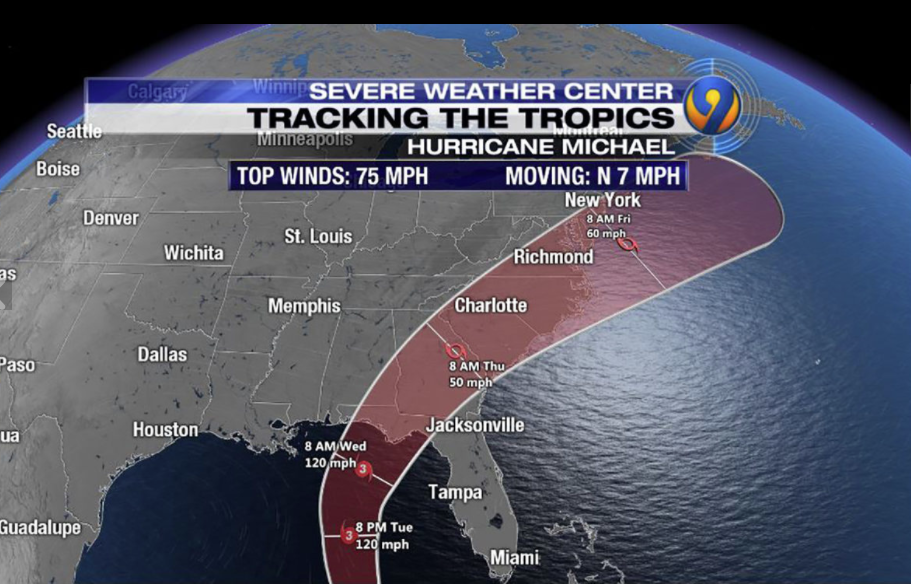 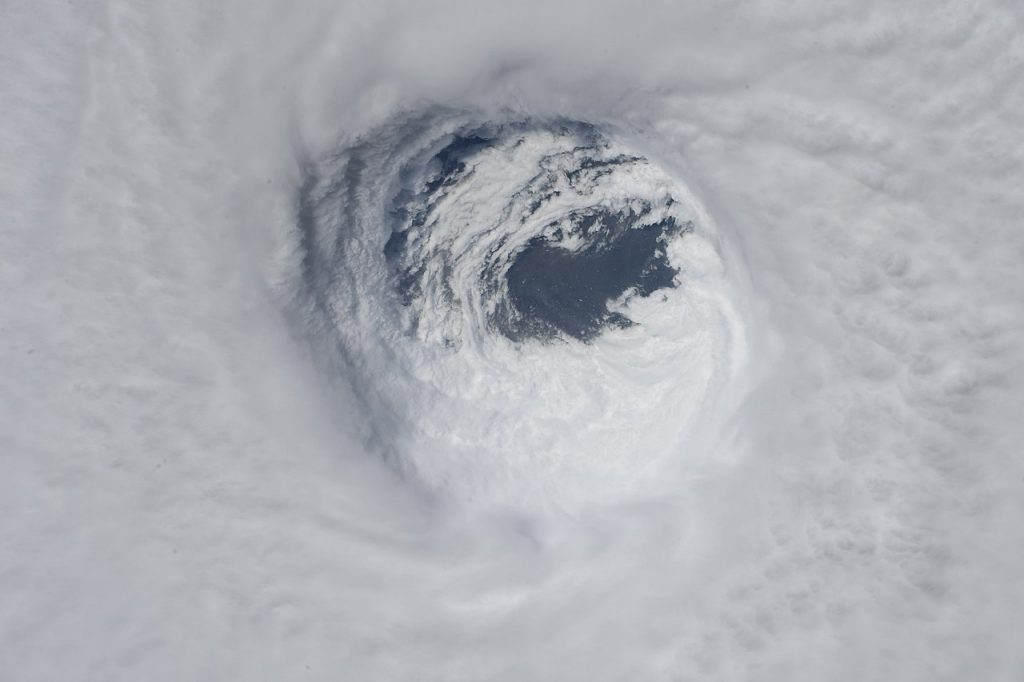 “The eye of Hurricane Michael seen from the International Space Station on October 10, 2018”

October 12, 2018:
Within 12 hours the storm had weakened to a Tropical Storm at around 12:00 am on October 11 the inner core of the storm collapsed, with the eye dissipating over central Georgia. Although it was in a weakened state, Michael continued to batter Georgia and the Carolinas with rain, tornadoes, and tropical storm-level winds (Fig. 3). In conclusion, Michael was a fast storm escalating from tropical storm to Category 4 hurricane and back to a tropical storm in just three days.

October 13-16th, 2018:
Michael subsequently accelerated east back out over the Atlantic Ocean and strengthened, into a powerful cyclone by October 14. On October 15, Michael ended its run by making landfall in Portugal early on October 16. Following landfall, what was left of Michael quickly weakened, dissipating later on the same day. But along the Florida Panhandle the devastation was done.

Impact of the Storm 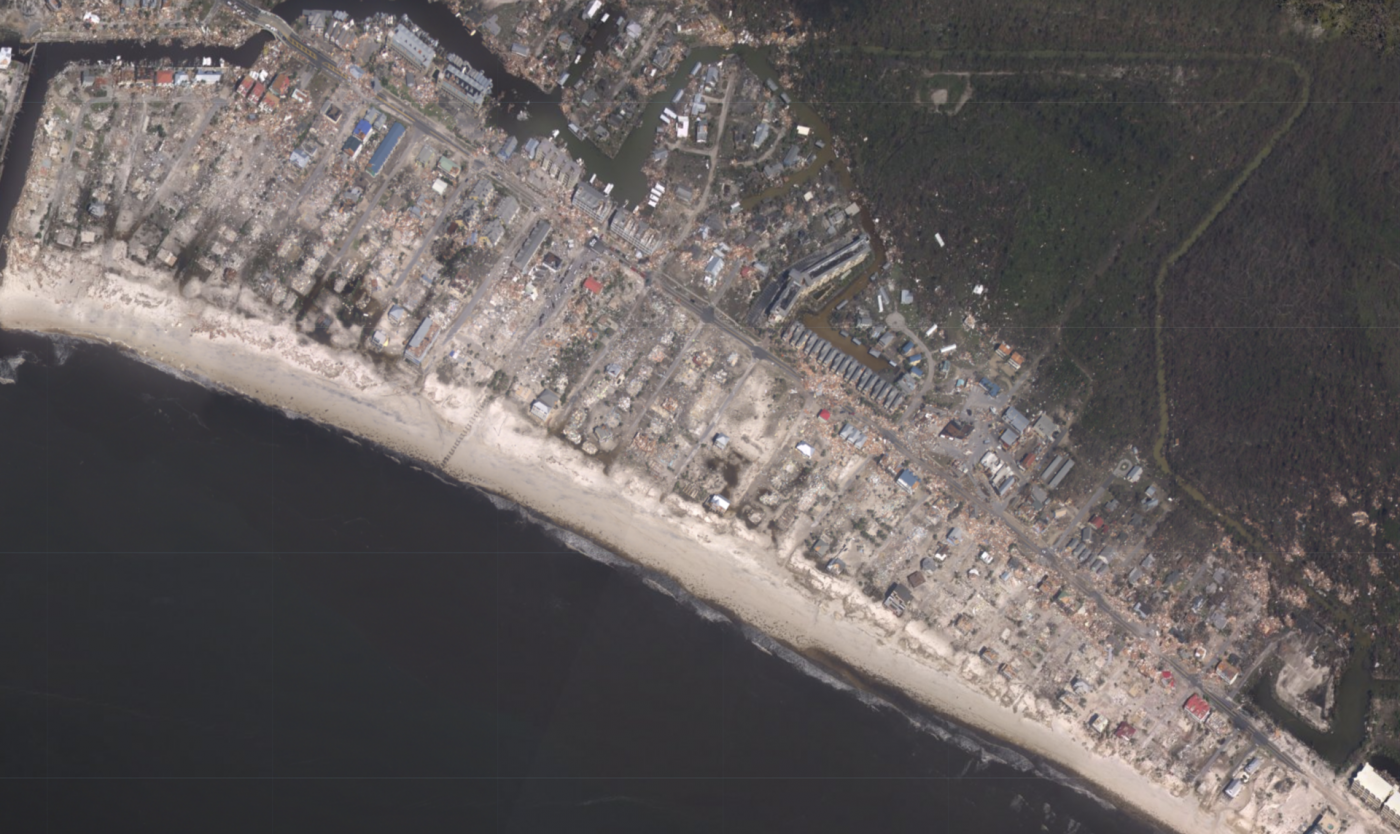 “A birds eye view of the massively storm surge damage post Hurricane Michael. This shot was taken above Mexico Beach, Florida which was the impact zone for this massive storm. The surge was so powerful that some homes were lifted clean off of their foundations and shoved inland.”

As mentioned the storm surge pushed up to 8.50 ft in some areas and The Weather Channel has reported that surviving surges more than nine feet is “highly unlikely.” The reason being is that anything that can shove that much water inland most certainly can push large objects along its path. Anything from large debris to large cars can become killers with a storm this strong. Over further to the east from the eyewall in Apalachicola the winds were obviously weaker. However, because of the shape of the coastline the surge was just as powerful. According to storm surge specialist for the National Hurricane Center Jamie Rhone added, “Because of the coastline shape “It gets pinched tighter and tighter and higher and higher as the water goes over an increasingly narrow space. That’s why we saw the 9-to-14 foot forecast extend so far east of the eyewall.” 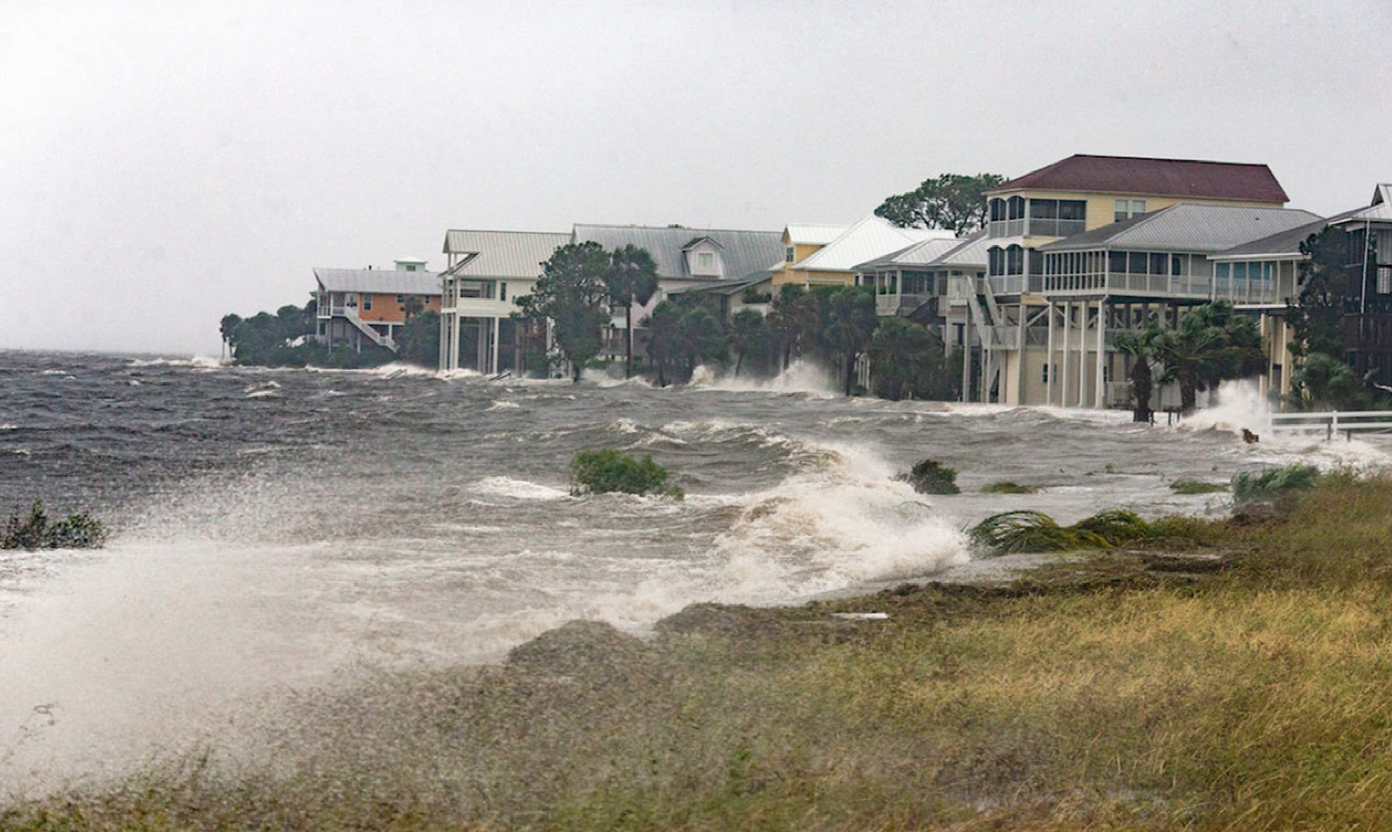 Another factor that comes into play when a storm like Michael hits is if the tide is high at the time then the surge can be much higher and more dangerous. Fortunately for panhandle residents the area was at low tide when the storm came ashore. Even so, according to the Storm Surge Unit at the National Hurricane Center’s tweet below they predicted 9 – 13ft of inundation from Michael’s surge. 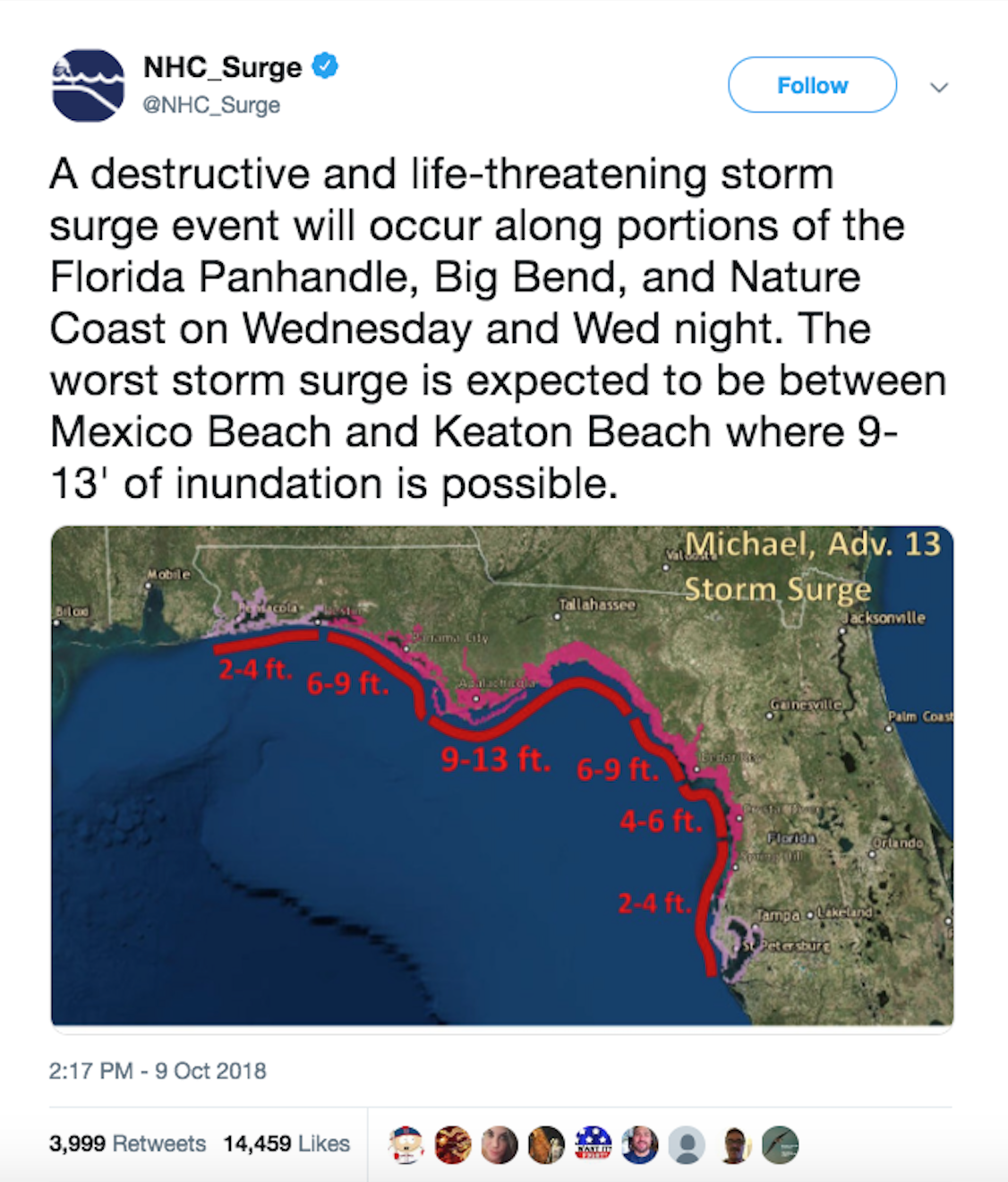 As Michael pushed inland away from the coast a surge warning for over 400 miles of coastline still remained in effect. Forecasters quickly made surge models so that first responders would know what to expect as far as damage along the coast.

Michael was a very fast moving storm. The bad news when dealing with a fast moving storm is that state, local and federal agencies are dealing with a shorter timeline to prepare for Michael to make landfall. The good news is that a fast moving storm like Michael shows up and moves on without sticking around to continue pounding a particular area with rains and devastation. As reported by the Weather Channel, Michael in fact spread rains far and wide from down in the Panhandle of Florida to the mid-Atlantic and up through New England, but since it did move fast the flooding was not as bad as it could have been like it was for storms like Harvey last year in Texas. Still there were over 200 reports of flash flooding in the 48 hours from when Michael first made landfall. All of it was attributed to Michael.

Surprisingly a majority of the flooding reports were not in Florida where Michael first made landfall but instead in Virginia. These prompted flash flood warnings from the National Weather Service across areas already still soaked previously from Hurricane Florence. Areas included Daniville, Richmond and Roanoke, among other locations in Virginia. 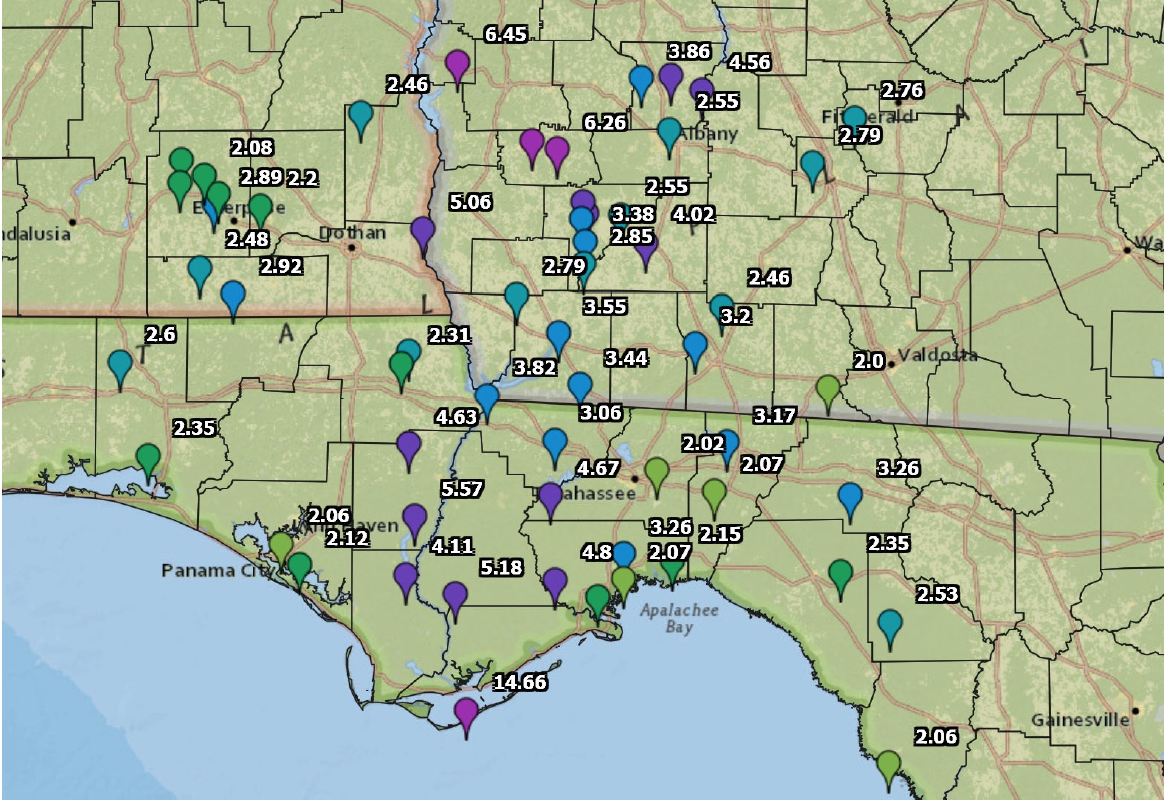 Hurricane Michael was massive and winds were registered from where the storm made landfall in Florida to Washington DC all the way north to some parts of New Jersey. The figure below shows some of the wildest and strongest gusts following Michael’s immediate landfall and progression inland. These figures were captured from the meteorological stations throughout the state of Florida. At the time of Michael’s landfall gusts from the center of the storm registered as high as 129mph in Panama City. The gusts also reached out to 175 miles from the storm’s eyewall.

Some of the other reported wind gusts were 89 mph in Apalachicola, 71 mph in Tallahassee.  Other notable maximum wind gusts in Donalsville GA up to 115 mph. And keep in mind that these are the observations that were isolated by instruments in the area. There were likely gusts far inland that were higher in other locales where instruments were not in place or had failed due to destruction altogether. One example was that, the Florida Coastal Monitoring Program (FCMP) that Complete is involved with deployed three towers prior to Hurricane Michael making landfall. One of the towers located near Tyndall Air Force base recorded gusts up to 130 mph before being destroyed. Hurricane force winds were recorded from Apalachicola to St. George Island. 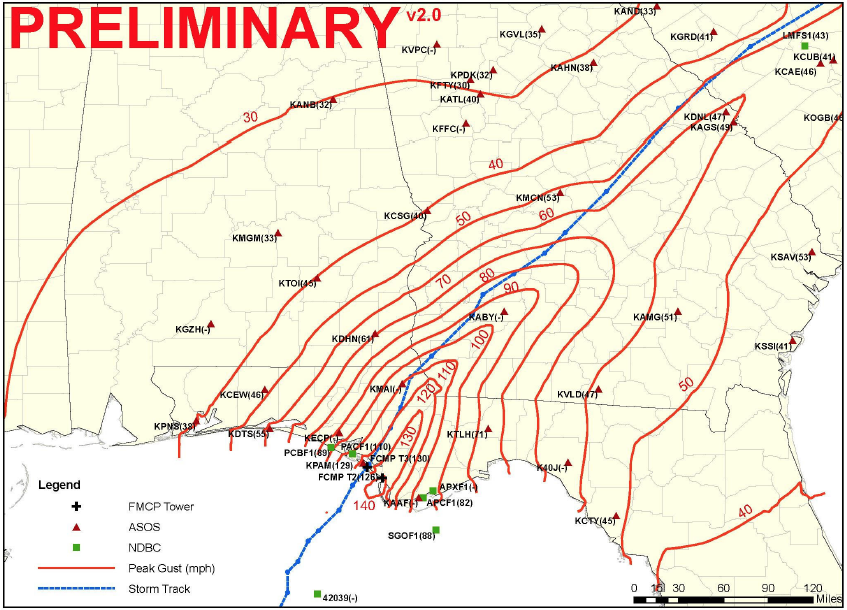 “The above graphic via ARA shows that Hurricane Michael’s wind gusts did not significantly dissipate as they moved inland.”